Home › Prosecution & Defense › Drug-Sniffing Dogs & Probable Cause: Supreme Court Considers When “A Sniff Is Up to Snuff”

Drug-Sniffing Dogs & Probable Cause: Supreme Court Considers When “A Sniff Is Up to Snuff”

The alert of a drug-sniffing dog might allow police to search your car or baggage, but just how reliable does that hound have to be?  The U.S. Supreme Court provided some guidance but rejected a fixed checklist of requirements in Florida v. Harris, the first of two significant dog-sniffing cases that were argued before the high Court last October.

For over forty years, law enforcement officials in the United States have used drug-sniffing dogs as part of their effort to detect illegal narcotics.  Police may use such dogs at routine traffic stops or in airports without need for a warrant or probable cause because, as the Court famously ruled in United States v. Place, 462 U.S. 696 (1983),  the sniff of a police dog is not considered a search subject to Fourth Amendment protection.  Courts have made clear that while the use of a drug-sniffing dog doesn’t require probable cause, the dog’s detection of the scent of narcotics can produce the probable cause that justifies a police search.

But should that always be the case?  In his dissent in Illinois v. Caballes, 543 U.S. 405 (2005) Justice Souter wrote, “The infallible dog … is a creature of legal fiction.”   Was Justice Souter right?  Are there circumstances under which a positive alert from a drug-sniffing dog does not constitute  probable cause for a search?  That was the argument from the defendant in the Harris case.

Consider the facts of Harris: a police officer observed Harris’s truck on the road with an expired license plate, and pulled Harris over as part of an ordinary traffic stop.  After pulling him over, the officer noticed that there was an open alcoholic container in the vehicle and Harris appeared nervous.  Harris refused to consent to a vehicle search.  Not surprisingly, the officer then retrieved his specially trained police dog, Aldo, from the vehicle and walked Aldo around the truck.  Aldo gave an alert at the driver’s side door handle that signified he had detected the scent of drugs there.  The officer then searched Harris’s truck and uncovered ingredients for making methamphetamine.  Harris was arrested and released on bail.  Amazingly, while on bail, Harris was pulled over again for having a broken tail light by the same officer, and subjected to another sniff and alert by Aldo.  The second time, however, the officer found 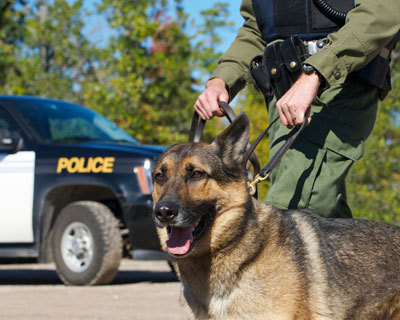 nothing in the truck.

At a subsequent hearing to suppress the evidence found in the first search, Harris argued that Aldo’s alert was insufficient probable cause for the search of his vehicle.  Harris offered two reasons: (1) Aldo’s certification in drug testing (issued by a private company) had expired a year prior to the search; and (2) in both searches, Aldo smelled drugs that were not found in Harris’s truck (Aldo was trained to detect the scent of  methamphetamine, but not the scent of the meth ingredients that were actually found in Harris’s truck).  The state countered Harris’s argument with extensive training and testing records for Aldo.

The Florida Supreme Court agreed with Harris and suppressed the evidence.  “[T]he fact that a dog has been trained and certified is simply not enough to establish probable cause,” the Florida court wrote.  Instead, the Florida court concluded, the state must produce “the dog’s training and certification records, an explanation of the meaning of the particular training and certification, field performance records (including any unverified alerts) and evidence concerning the experience and training of the officer handling the dog, as well as any other objective evidence known to the officer about the dog’s reliability.”

Justice Kagan, writing for an unanimous Court, flatly rejected the Florida court’s holding.  Determining probable cause is a fluid approach, wrote Kagan, “turning on the assessment of probabilities in particular factual contexts – not readily, or even usefully, reduced to a neat set of legal rules.”  By creating a checklist of fixed requirements for drug-sniffing dogs, the Florida

court had “flouted” the Court’s probable cause jurisprudence.  The proper test, said the Court, is “whether all the facts surrounding a dog’s alert, viewed through the lens of common sense, would make a reasonably prudent person think that a search would reveal contraband or evidence of a crime.”

In the course of emphasizing analysis driven by factual context, however, the Court did provide guideposts.  The Court concluded that a dog’s reliability is better measured in controlled testing environments rather than in field performances, where a number of variables may contribute to errors in the record.  Significantly, the Court noted that a dog’s satisfactory performance in a training or certification program could by itself  provide sufficient reason for a court to presume that a dog’s alert constituted probable cause.  A defendant must also have the opportunity to challenge the evidence offered by the state, the Court explained, such as contesting the adequacy of a training program or introducing evidence of poor field performance, an officer cueing a dog, or a team working under unfamiliar conditions.

Under the circumstances of the case, the Court concluded that Aldo’s substantial training and demonstrated proficiency gave the officer sufficient reason to trust the dog’s alert.  It should be noted, however, that Harris could not challenge Aldo’s training on appeal because he had failed to do so in the trial court.

Harris undoubtedly gives law enforcement officials a long leash for their police-sniffing dogs, but also dispels the legal fiction of the “infallible dog.”  Next up on the Court’s dog docket: Florida v. Jardines, a case that examines whether police may use a drug-sniffing dog to check the front porch and door of a home suspected of illegal drug activity.